From getting a last minute call to fill a slot on the show to struggling with the judges’ feedback and of coursethat nail biting auction, Racheltime on The Block it was hectic to say the least.

Since returning to normal life after a whirlwind three months, the 36-year-old has opened up about it all in Instagram Q&A with fans.﻿

At auction Rachel and Ryan passed in their home but managed to negotiate their way into second place and a $169,000 profit.

Fans were quick to ask if Rachel felt her time on the show was a “waste of time”, to which the Blockhead answered “absolutely not at all!”

“We met the best people, not just the contestants but absolutely everyone involved in the show. And we walked away with an amazing amount of money for three months,” she replied on Instagram.

Rachel said she and husband Ryan would “do it again in a heart beat” and were “so grateful” with their outcome.

EXCLUSIVE: Rachel and Ryan on making the difficult decision to pass their house in

As for how she felt about Omar and Oz’s win, Rachel took her hat off to the boys for “playing an unbelievable game”.

“What a win for them and their families!” she wrote.

While Rachel and Ryan have finally come out the other end of The Blockit wasn’t always an easy ride.

It was a tough few first weeks for the pair who were rattled by criticism from the judges for being “too bland”.

Rachel admitted it was “so hard” to hear the same feedback week in and out.﻿

“I couldn’t understand it. We were getting told we weren’t country enough and other teams were praised for being Japanese inspired. We were too safe, other teams were repeating aesthetic choices and winning rooms,” she replied to one question.

“It was so confusing so we just had to decide to stop listening and go with our gut!”

The couple finally found their groove in the later half of The Block and Rachel said it’s all thanks to a magical combination of Ryan’s natural talent and her learnings along the way.

“Ryan is absolutely insane at structural design! He’s just a natural at it, I’ve never had formal training in design but I’ve taught myself a lot through reading and research and The Block taught us so much!” she said.

With The Block officially over for 2022 and no guarantee of when fans will see Rachel and Ryan next, there was lots of curiosity about what’s next for the couple.

But so fresh off the end of the season, Rachel said she’s “honestly not too sure.”﻿

“The Block has opened so many doors for us and there are lots of exciting conversations happening right now so hopefully we’ll have some news and plans soon.”

Check out the incredible house Rachel and Ryan built during just 12 weeks on The Block in the gallery below.﻿ 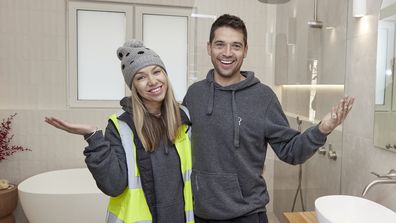 Cohesive, contemporary, and a hit with the judges.