A vet clinic has issued a warning about the danger of dogs playing fetch with sticks after a cocker spaniel nearly died from being impaled with a sharp branch in Scotland.

Glasgow pet owners Jennifer and Allan McDonald rushed 177km to the nearest hospital after their beloved dog Brodie was pierced by a stick during a walk, Vets Now reports.

Allan had taken five-year-old Brodie for a quick outing on his lunch break in November last year and threw a stick during an innocent game of fetch.

The stick lodged into the ground and Brodie was brutally impaled when he jumped on top of it, causing it to lodge into his throat and stomach.

The owners made a 177km mercy dash to an animal hospital, terrified Brodie might not survive the injury.

“Allan was quite a way from his car, so he phoned me, and I drove straight there. Brodie was lying on his side like he was paralyzed, with this stick poking out of his mouth,” Jennifer told Vets Now in a blog post shared by the clinic.

“We were both in shock and so scared. We thought we’d lost him.”

Brodie’s fight for his life

After arriving at the vet clinic, Jennifer and Allan were told Brodie needed a CT scan and the “best hospital facilities” if he was going to survive.

The anguished dog owners then made another four-hour drive to the Vets Now Hospital in Glasgow. By now, Brodie was still alert but was unable to stand upright due to the severity of the injury.

He was rushed into major surgery where vets painstakingly removed the stick, which had also pierced his esophagus.

Surgical specialist Ana Marques told Vets Now: “Our intensive care team kept him in overnight, ensured he was kept stable and pain-free in preparation for the CT scan and surgery the next morning.”

One panicked night later, Jennifer and Allan were given the incredible news Brodie would recover and could go home in a week’s time.

The couple want Brodie’s story to be a sobering reminder to other pet owners about the danger of using sticks during fetch,

“We’ll never throw a stick again,” said Jennifer. “We usually take a ball to throw anyway and that’s so much safer.

“After all we’ve been through, my advice to anyone thinking of playing with a stick with their dog is: just don’t. They can be so dangerous, and you never know what might happen.”

According to Australian after-hours vet clinic Perth Vet Emergencydogs shouldn’t play with or chew on sticks due to the potential injuries.

“Prevention is the best form of treatment in this circumstance. We do not recommend throwing, playing with, or chewing of sticks due to the severe injuries they can cause. In the long run, it is a lot safer and less costly to purchase toys specifically designed for your pet. Ask your local Vet Clinic or pet store for recommendations,” the team warns.

“The cheapest ‘stick’ alternative is a rolled up newspaper that has been taped together.”

For a daily dose of 9Honey, subscribe to our newsletter here 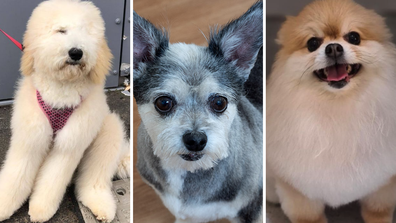 Dog grooming photos: Before and after